Foot on the Gas

Gigajoule and Total sign Joint Development Agreement for the importation of LNG and power generation. 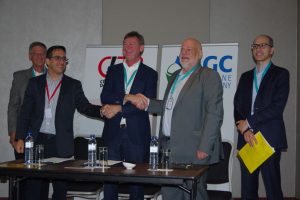 Liquified Natural Gas (LNG) will soon be delivered to a permanently moored Floating Storage and Regasification Unit (FSRU), in the Matola harbour. This facility will be connected to a gas-fired power plant in the Beluluane Industrial Park and, via the Matola Gas Company (MGC) infrastructure, to the South African gas network. The availability of a new source of much needed natural gas and power will fuel the economic growth in Mozambique and the Southern African region.

LNG could soon be shipped and supplied into a permanently moored Floating Storage and Regasification Unit (FSRU), in the Matola harbour. This could lead to additional power and gas to Southern Africa, alleviating the shortage of energy in the region. 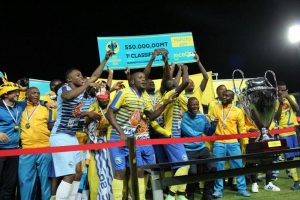 MGC and Gigawatt have been sponsoring the Mozambican football Youth Academy since 2009. This year, 2017, MGC and Gigawatt also became the proud sponsors of Clube de Desportos da Costa do Sol. Costa do Sol is the club with the most trophy wins in Mozambique. 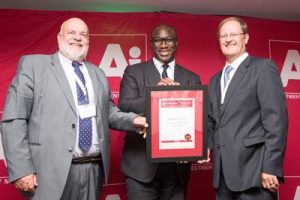 The Ai Infrastructure Project Developer Awards were designed to recognise and reward excellence amongst Africa’s project developers to a P an-African and global infrastructure investment audience.

The Ai African Developer of the Year category was open to African infrastructure project developers, including contracting and consulting engineers working as developers or in joint ventures or partnerships with developers.

The official inauguration on Friday of a 120MW gas-fired power station at Ressano Garcia, on the border between South Africa and Mozambique, marks the beginning of a new era for power generation in Southern Africa.

President Nyusi explained that the new power station results from a partnership between the government and the private sector, showing the importance of public/private partnerships.

Independent Power Producer, Gigawatt Mozambique, announced the successful commissioning of its 120 MW gas-fired power station at Ressano Garcia, on the border between South Africa and Mozambique.

The acceptance tests for the power plant were successfully completed on the 10th December 2015. Financing for the US$ 200 million (ZAR 3bn) project was secured in June 2014, construction started in August 2014 and first testing commenced in November. 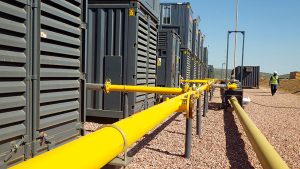 Gigawatt’s 100MW gas fired power station project was named as one of the best infrastructure finance projects in the world for 2014 by World Finance.

The first set of 13 Rolls Royce engines arrived in Mozambique beginning of April and is being installed at Gigawatt Park, Ressano Garcia. Each engine weighs around 150tons and produces 9 300kW of power. Gigawatt’s power station is moving ahead on time and within budget. As a result the 100MW power station is expected to be operational by the end of 2015.

On 23 April 2013, Gigajoule International (Pty) Ltd, and Empresa Nacional de Hidrocarbonetos (ENH), the Mozambican state owned oil and gas company, signed a Memorandum of Understanding (MoU). This MoU sets out the basis for the joint study and if feasible the construction of the 2100km pipeline from Cabo Delgado to Maputo and regional markets.